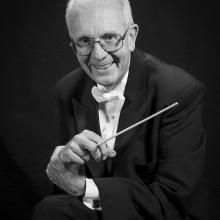 Dr. Marlan Carlson, professor of music and music director of the Corvallis-OSU Symphony orchestra is the Otwell Endowed Chair for University Orchestras. Carlson holds the Doctorate of Musical Arts and the Artists's Diploma from the Eastman School of Music and has been both a Fulbright Scholar and a Danforth Fellow. His professional career has included principal viola in the Heidelberg Staedtisches Orchester, the London Symphony and the Tokyo Metropolitan Orchestra. From 1988 through 1990 Carlson served as resident director of the Oregon Study Abroad Center in Stuttgart, Germany. During that time, he conducted the Hohenheim Wind Ensemble and played in the Stuttgart Bach Orchestra. In the course of his career at OSU, Carlson served as chair of the music department for 17 years, as well as resident director of study abroad programs in London, England; Cologne, Germany; Siena, Italy; Angers, France and Vienna, Austria. In 2000, Carlson was presented with the International Service Award by Oregon State University and the Excellence Award by the College of Liberal Arts Advisory Council. Following several enthusiastically acclaimed concerts in 2001 in Zhengzhou, China, Maestro Carlson returned to China several times over the next ten years to conduct professional symphony orchestras in a number of cities, including Shanghai and Tianjin. In June of 2007, Carlson and three Russian-American pianists recorded a CD in the studios of Radio Moscow with the Russian National Philharmonic. The CD includes concerti of Glazunov, Scriabin and Tchaikovsky, and was released by classicalrecords.ru in December of 2007.