The Stone Award for Literary Achievement, created by a generous gift from Vicki and Patrick Stone '74, honors a major American author who has created a body of critically acclaimed literary work and has been - in the tradition of creative writing at OSU - a dedicated mentor to succeeding generations of young writers. The 2019 winner is Pullitzer Prize winning author, Colson Whitehead. 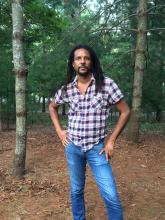 Free and open to the public
Book Signing to follow program

Colson Whitehead is the #1 New York Times bestselling author of The Underground Railroad (an Oprah’s Book Club selection and winner of the National Book Award and Pulitzer Prize), The Noble Hustle, Zone One, Sag Harbor, The Intuitionist, John Henry Days, Apex Hides the Hurt, and one collection of essays, The Colossus of New York.

Colson Whitehead’s reviews, essays, and fiction have appeared in a number of publications, such as the New York Times, The New Yorker, New York Magazine, Harper’s and Granta.
He has received a MacArthur Fellowship, A Guggenheim Fellowship, a Whiting Writers Award, the Dos Passos Prize, a fellowship at the Cullman Center for Scholars and W+riters, and was a finalist for the Pulitzer Prize for John Henry Days.

He lives in New York City.

The biennial Stone Award is one of the largest prizes of its kind given by an American university. Past recipients include Joyce Carol Oates, Tobias Wolff and Rita Dove.